Save your Mobile Devices with a Screen Protector 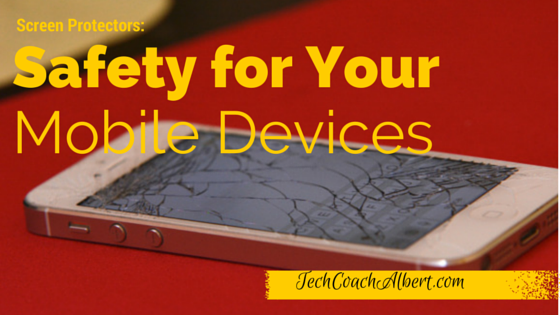 Let’s face it, our mobile devices are attached to us at the hip. But over time we drop them, scratch them, throw them in our purse or pocket and they end up looking like they’ve been used in a game of Kick-the-can. There are a few things you can do to help save your mobile devices from this torture. One being a full on monster sized indestructible case. Remember that nice slim, sleek phone you first bought? Now it looks like a TANK and a total pain in the butt to get out of your pocket. The price we pay for protecting our precious purchase.. Until now..

Screen protectors have come a long, long way in the past few years. I remember when we first started using them back in the early 2000’s for handhelds used by delivery drivers. they were thin sheets of plastic that didn’t stick well. Always peeled at the edges, scratched up WAY to easily and made the screen just look blah. Now, we’ve got choices! There are 3 major types of screen protectors:

The PET Film is a basic plastic film with silicon adhesive on one side and a simple scratch-resistant, matte coating on the other. It’s the basic level of protection offered above the screen itself. It helps, for sure. But it will scratch, and eventually discolor. These screen protectors often come in packs because you WILL eventually need to replace it. They do have a “scratch-resistant” coating, it’s not going to prevent a good key scratch from showing on the protector. These screen protectors are merely a disposable protector that will protect your screen from the everyday basic usage. And when it wears out, its so cheap you just pull it off, throw it away and put on a new one.

Click here to search Amazon for a PET Screen Protector 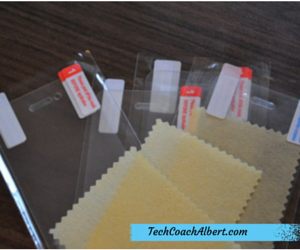 The TPU film is a bit more advanced than the basic PET Screen Protector. This film is a special blend of chemicals and plastic that prevent scratches, oil/grease, increased toughness and has an elastic-type ability. This  elastic-type ability means that a lighter scratches will slowly fade away and just leave a light “dent” in the plastic cover.  They are tougher than the PET protector AND have a self-healing type capability. Pretty cool. It’s going to provide quite a bit more protection over the standard PET film, but it doesn’t perform quite as well as the next option.

Click here to search Amazon for a TPU Screen Protector

Tempered Glass screen protectors are the granddaddy of them all. These super thin (generally around 0.4mm thick) are made up of a shock absorbing silicon bottom layer, a layer of the PET film, a layer of

tempered glass and an oleophobic coating. What does all that translate to? The stuff is super strong, scratch, dust and sand resistant. Oil and fingerprint resistant, anti-reflective and super clear. Which almost makes the screen look BETTER. On top of all that, it’s a super hard glass that when you drop your mobile device, the screen protector itself is designed to try and “take it for the team” and shatter instead of the actual glass on your mobile device. It’s a whole lot easier to replace a screen protector than it is to pay to get your phones screen replaced. THIS is the one you want!

Want to see what a Tempered Glass Screen Protector looks like and how they are applied? See below!

The following video is me applying the Xtreme Guard Spartan Tempered Glass protector to my Samsung Galaxy S4 smartphone. It’s extremely simple. Check it out and see how you can do it yourself too.

Have you used a screen protector? Which one and what was your thoughts about it? Please let me know in the ‘Leave a Reply’ section below!!

Albert Dutra, the creator of The Tech Coach and owner of AlbertD Photography is here to help my friends and followers gain more knowledge with the software and tech devices they use on a daily basis. Learn how to use various applications and gadgets to help save time, money and most of all, getting frustrated.

Hey! My name is Albert, but most people call me 'Hey can you fix my computer?". I am a 15+ year veteran to the computer world. A Senior Level Technical Support consultant in Windows, Software and Mobile Devices. I am the creator of The Tech Coach Website and owner of AlbertD Photography and I am here to help my friends and followers gain more knowledge with the software and tech devices they use on a daily basis. Learn how to use various applications and gadgets to help save time, money and most of all, getting frustrated.